To stay updated on our progress, submit your email below and approve the confirmation request that is sent. You will be automatically notified when we publish important updates on the official CIT blog. 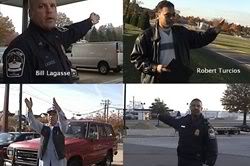 SAN JUAN CAPISTRANO — A three year independent investigation into the September 11, 2001 attack on the Pentagon has yielded new eyewitness evidence which, according to the Southern California-based researchers who conducted the investigation, "conclusively (and unfortunately) establishes as a historical fact that the violence which took place in Arlington that day was not the result of a surprise attack by suicide hijackers, but rather a military black operation involving a carefully planned and skillfully executed deception."

They have compiled the most pertinent testimony into an 81 minute video presentation entitled National Security Alert, which has earned the respect and praise of a growing number of distinguished academics, journalists, writers, entertainers, pilots, and military personnel.

The investigation involved multiple trips to the scene of the crime in Arlington, Virginia, close scrutiny of all official and unofficial data related to the event, and, most importantly, first-person interviews with dozens of eyewitnesses, many of which were conducted and filmed in the exact locations from which they witnessed the plane that allegedly struck the building that day.

"There were a growing number of people in the United States and around the world who were suspicious of the government's story about what had happened at the Pentagon that day," Ranke explains.

"The doubts were initially fueled by the dubious damage to the building, which seemed incompatible with a 757 crash, the deliberate lack of transparency by the authorities, and many other issues, but they really intensified after a team of professional pilots (Pilots for 9/11 Truth) analyzed the data obtained from the National Transportation Safety Board (NTSB) via a Freedom of Information Act request in 2006, which was supposedly from the black box of American Airlines Flight 77.

"They found that the last reported altitude of the plane was far too high to have struck the light poles or the building. This meant that either the plane did not cause the observed physical damage, that the government had released fraudulent data, or both." 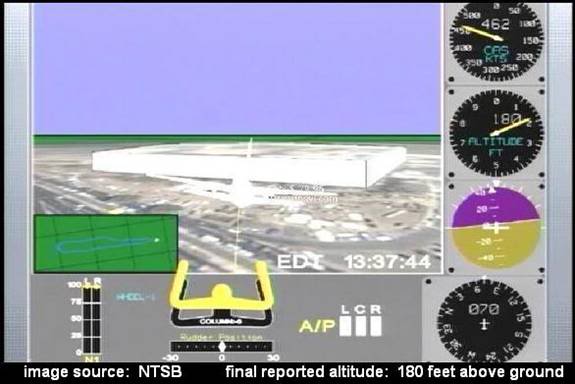 "We were tired of the cover-up, but we were also frustrated with the dead-end theorizing that was taking place", says Marquis of the project's genesis. "We knew that the only way we were ever going to know what had really happened was if we actually went to the area, knocked on doors, and interviewed everyday people about what they saw."

When these eyewitness accounts are aggregated, they paint a very disturbing picture, say the researchers.

"To put it as concisely as possible, the plane had to have flown on a very specific flight path in the final seconds before it reached the Pentagon in order to have caused the observed damage, starting with the light poles that were photographed on the ground and ending with the directional damage to the building itself which was outlined in detail by the American Society of Civil Engineers," explains Ranke. "The government claims the plane flew on this flight path and hit the building. The eyewitnesses in all of the most critical vantage points, on the other hand, independently, unanimously, and unequivocally report a drastically different flight path, proving that the plane absolutely could not have hit the light poles or the building. It is a non-controversial scientific fact that a strike from this trajectory would have caused a very different damage path." 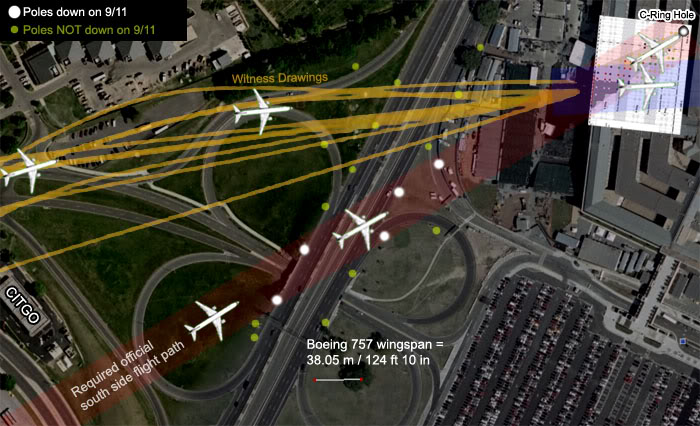 It wasn't just witnesses who watched the plane approach the building that the team spoke with, however.

"We've also published our interview with a Pentagon police officer who saw the plane flying away from the Pentagon immediately after the explosion", says Marquis. "We already knew that the plane could not have hit based on the testimony of the witnesses on the other side of the building who watched it approach, but it was still vindicating to get this kind of confirmation."

A 2006 Scripps Howard/Ohio University poll found that "More than a third of the American public suspects that federal officials assisted in the 9/11 terrorist attacks or took no action to stop them so the United States could go to war in the Middle East." Nevertheless, Ranke and Marquis acknowledge it is still quite controversial to claim, as they do, that "criminal elements within the U.S. government" were complicit in the attacks.

"If you are skeptical of (or even incensed by) this statement we do not blame you," reads a note on the front page of their website, CitizenInvestigationTeam.com. "We are not asking you to take our word for it, nor do we want you to do that. We want you to view the evidence and see with your own eyes that this is the case. We want you to hear it directly from the eyewitnesses who were there, just as we did."

Many people seem to be taking them up on this offer. Their video has already received almost 70,000 views online since it was first posted to their website a few weeks ago with only a grass roots promotional effort behind it.

Perhaps more notable than the size of the audience, however, is the caliber of some of the people in it. A newly-published compendium of endorsements on the CitizenInvestigationTeam.com website includes praise from a wide array of distinguished and well-respected Americans.

Emmy-award winning actor and former president of The Screen actors Guild, Ed Asner, calls the film a "reasoned, and methodical look at witness testimony the day the Pentagon was attacked on Sept. 11th."

Prolific non-ficition author Dr. Peter Dale Scott, Professor Emeritus of the University of California, Berkeley affirms that the film "successfully rebuts the official account of Flight 77's flight path on 9/11 as it approached the Pentagon."

"If you accept the placement of the plane as independently and unanimously reported by the witnesses presented in CIT's video National Security Alert, science proves that it did not cause the physical damage at the Pentagon on 9/11/2001," says FAA certified pilot Robert Balsamo.

Dr. David Ray Griffin, author of The New Pearl Harbor Revisited: 9/11, the Cover-Up, and the Exposé and many other titles, says he is "pleased to be able to recommend this important film with enthusiasm," while scholar, author, and radio host Dr. Kevin Barrett says that the film proves "that the official version of the attack on the Pentagon is false, and that the attack must have been a deceptive military operation, not the kamakaze crash of a hijacked commercial jet."

Scott McKinsey, an award-winning network television director, says "The DVD offers no theorizing or speculation; only corroborated eyewitness evidence contradicting the official flight data to support an overwhelming argument that a plane did not slam into the Pentagon on 9/11."

Architect Richard Gage, AIA, founder of Architects and Engineers for 9/11 Truth (AE911Truth.org), a coalition of over 700 professional architects and engineers calling for a new independent investigation of the destruction of the three skyscrapers in New York on 9/11 (the third was World Trade Center 7), calls the film "long overdue, but worth waiting for" and says that it "deserves serious attention."

Retired Navy Commander and aviator James R. Compton calls National Security Alert "the best reporting I've seen in a long, long time" and "a must see for every citizen in our country."

"Government and media figures who dare ignore evidence this conclusive do so at their own peril," warns Lt. Col. Shelton Lankford, a retired Marine pilot who has flown 303 combat missions.

The full quotes from these individuals and others can be read at www.citizeninvestigationteam.com/praise

National Security Alert can be viewed for free online at www.citizeninvestigationteam.com/nsa