Frequently Asked Questions » Weren't there photographs of plane parts taken inside and outside of the Pentagon on 9/11 and shortly thereafter? Don't these photographs prove that Flight 77 hit the building?

This is pretty much the extent of the semi-recognizable pieces photographed inside and outside of the building:

Please remember that the suspiciously small amount of plane debris was one of the reasons that many people were initially skeptical as to whether or not a plane really hit the Pentagon in the first place.

None of the photographed parts have been positively identified as belonging to "Flight 77" or tail #N644AA via the matching of serial numbers, and there has been no attempt to reconstruct the plane as is usually the protocol during aircraft crash investigations.

Furthermore, the mere presence of these pieces of debris does not prove a plane hit. Once again the suspect in question had complete control of the area, which had been under "renovation" for years. Parts photographed inside could have easily been placed there before or after the event.  Parts photographed on the outside lawn could also have been easily planted, either shortly before the event or during the chaos that ensued just after the explosion.  Minutes after the "attack" (flyover) there was a panicked evacuation for fear of another plane coming in. 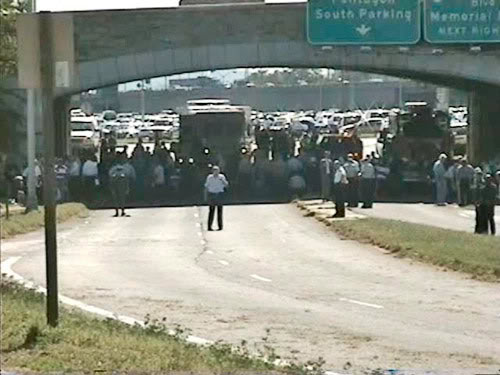 This evacuation was discussed by multiple first responders, such as Lt. Robert Medairos, the Arlington County Police Department's "first incident commander at the scene," and Eileen Murphy, Head Nurse of the Minor Surgery Clinic at the DiLorenzo TRICARE Health Clinic, who was inside the Pentagon at the time of the explosion (alleged impact). You can view and read their testimony here. 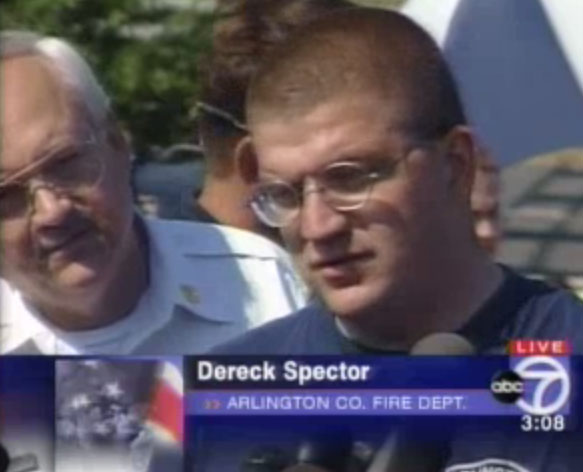 REPORTER: Derek, we know you guys are trained to do two things: put out fires and save lives.  How frustrating was it for you as an individual to have this fire continue to burn?

DEREK SPECTOR: I think it wasn't so much the frustration of it continuing to burn.  The frustration that we had was that we had to keep evacuating the structure because we had more reports of more planes and-- and possible, uh-- somebody trying to continue to do, uh, more damage to the Pentagon, and that kept-- kept withdrawing us from the scene and we-- that was probably the most frustrating thing about the whole thing.

On September 11, 2010, 9 years after the attack, the Nataional Geographic Channel (NatGeo) aired a special which contained never-before-seen footage documenting the evacuation(s).

In addition to the relatively small number of parts depicted above, there was also a significant amount unrecognizable debris that has been cited as proof that plane crashed.  The image below shows quite a bit of debris in small pieces strewn all over the helipad area.  (Click image to view higher resolution version.)

However, even if some of this unrecognizable debris did originally come from a plane or planes, which has not been proven, the conclusive evidence of a north side approach and flyover proves that this debris did not come from AA77, N644AA, or any other plane crashing into the Pentagon, and therefore must have gotten there some other way.

As it turns out, it would have been rather simple for this debris to have been dispersed during the explosion, as there were renovation construction trailers that were right in front of the alleged impact point and next to the helipad which were obliterated during the attack.

In light of the evidence proving that the plane did not hit the building it is reasonable to hypothesize that the unidentified, unrecognizable little pieces of debris were blown out from these trailers.