Frequently Asked Questions » If Flight 77 did not hit the building what happened to its passengers and crew?

Let's be clear: we have never claimed that the low-flying plane seen by all of the witnesses that we interviewed was actually American Airlines Flight 77, nor do we believe that to be the case. Even the 9/11 Commission Report acknowledges that AA77 was completely lost from radar as early as 8:56. On p. 8-9 they write: 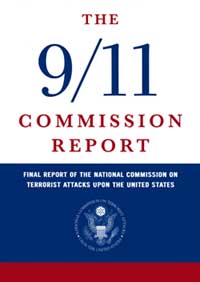 At 8:51, American 77 transmitted its last routine radio communication. ... At 8:54, the aircraft deviated from its assigned course, turning south. Two minutes later the transponder was turned off and even primary radar contact with the aircraft was lost. The Indianapolis Air Traffic Control Center repeatedly tried and failed to contact the aircraft. American Airlines dispatchers also tried, without success.

This occured near the Kentucky-Ohio border, almost 300 miles west of the Pentagon, as depicted in the following image released shortly after 9/11 by Flight Explorer, a Virginia-based company whose commercial software uses FAA air traffic control reports, which are updated as often as every 10 seconds, to track airplanes' locations, speed, altitude and more in near real-time.

The transcript of alleged radio communications with AA77, published by the New York Times in October of 2001, tells the same story: AA77 makes its final transmission just before 8:51, after which time it is never heard from again, despite repeated attempts by personnel at both Indianapolis Center and American Airlines to re-establish contact.

There is no independent or verifiable evidence in the public domain, official or otherwise, proving what happened to AA77 after 8:56-8:57. The plane that eventually appeared in the airspace over Arlington and Washington D.C. shortly after 9:30, which is falsely alleged to have crashed into the Pentagon, was never positively identified. This too is repeatedly acknowledged by the 9/11 Commission:

"At 9:32 ... Several of the Dulles controllers observed a primary radar target tracking eastbound at a high rate of speed and notified Reagan National Airport. FAA personnel at both Reagan National and Dulles airports notified the Secret Service. The aircraft's identity or type was unknown." (p. 25)

"At 9:36, the FAA's Boston Center called NEADS and relayed the discovery about an unidentified aircraft closing in on Washington" (p. 27)

"After the 9:36 call to NEADS about the unidentified aircraft a few miles from the White House, the Langley fighers were ordered to Washington, D.C." (p. 27)

"[The military] had at most one or two minutes to react to the unidentified plane approach Washington, and the fighters were in the wrong place to be able to help." (p. 34)

It's also corroborated by air traffic controllers working out of nearby Washington Dulles International Airport that morning, such as Todd Lewis, who told Dateline: 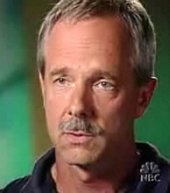 One of my colleagues saw a target moving quite fast from the northwest to the southeast. So, we all started watching that target, and she notified the supervisor. But nobody knew that was a commercial flight at the time. Nobody knew that it was American 77. ... I thought it was a military flight." 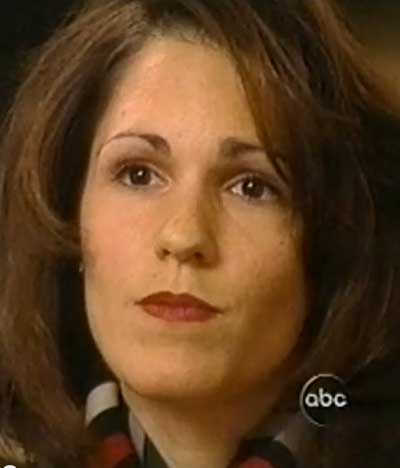 "We started moving the planes in as quickly as we could. ... Then I noticed the aircraft. It was an unidentified plane to the southwest of Dulles, moving at a very high rate of speed ... I had literally a blip and nothing more."

During our multi-year, independent investigation, we have personally interviewed dozens of eyewitnesses who saw this plane — which they describe as a large, twin-engine jet — minutes later, as it flew at just above tree-top level over Arlington in its final moments before reaching the Pentagon.

While reports vary regarding its exact colors and markings, many insist that the plane did not look like an American Airlines jet, and a number of them describe it as predominantly white or off-white in color.

Because there is not a clear enough consensus among the witnesses regarding how the plane was painted, we stop short of claiming to conclusively know the exact details, but we do feel that the evidence is very strong that this unidentified plane did not look like a signature silver American Airlines 757, with blue and red stripes down the side and a big "AA" on the tail.

More importantly, what the aggregated witness reports and the body of evidence as a whole are (extremely) clear on is that the plane approached on a flight path that makes it physically impossible for it to have caused ANY of the documented damage inside and outside of the building. It could not have and did not hit the building. This is why it was seen flying away immediately after the explosion by multiple-eyewitnesses, such as Officer Roosevelt Roberts Jr, and why cab driver Lloyde England's story completely fell apart under scrutiny.

So, there is no reason to believe that this unidentified plane was American Airlines Flight 77, and an abundance of evidence that it was not.

In no way does the fact that average citizens lack the access and resources to discover the true fate of AA77 change or undermine the evidence that is already a matter of public record which proves that it did not hit the Pentagon, and thus that 9/11 was a full-blown "false flag" black op.

We always caution against speculation, but for those who are simply looking to get a plausible idea of what might have happened to AA77, we believe Operation Northwoods provides a prototype.

Here is how Operation Northwoods was described in an ABC News article in 2001, shortly after the declassified documents were uncovered: 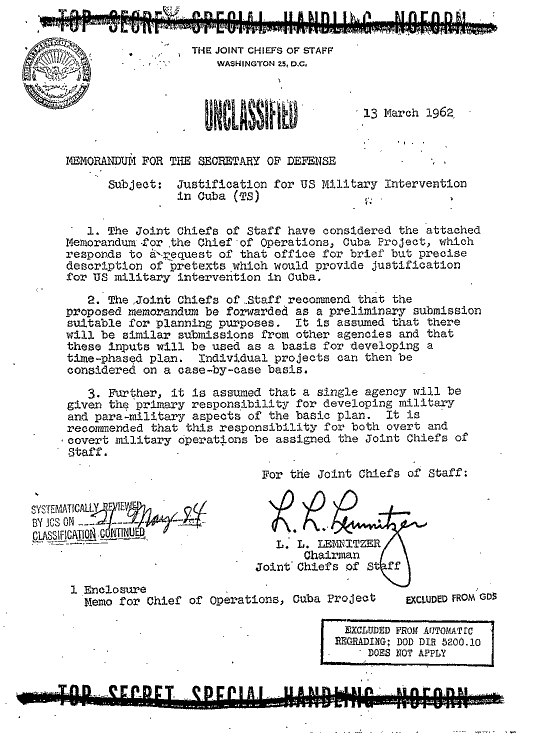 In the early 1960s, America's top military leaders reportedly drafted plans to kill innocent people and commit acts of terrorism in U.S. cities to create public support for a war against Cuba.

The plans were developed as ways to trick the American public and the international community into supporting a war to oust Cuba's then new leader, communist Fidel Castro.

America's top military brass even contemplated causing U.S. military casualties, writing: "We could blow up a U.S. ship in Guantanamo Bay and blame Cuba," and, "casualty lists in U.S. newspapers would cause a helpful wave of national indignation."

The plans had the written approval of all of the Joint Chiefs of Staff and were presented to President Kennedy's defense secretary, Robert McNamara, in March 1962. But they apparently were rejected by the civilian leadership and have gone undisclosed for nearly 40 years.

Scanned copies of the full declassified Operation Northwoods documents are available online and are an absolute must read for anyone trying to wrap their minds around the 9/11 deception as a whole, but sections eight and nine are particularly relevant to the Pentagon event and potential fate of Flight 77: 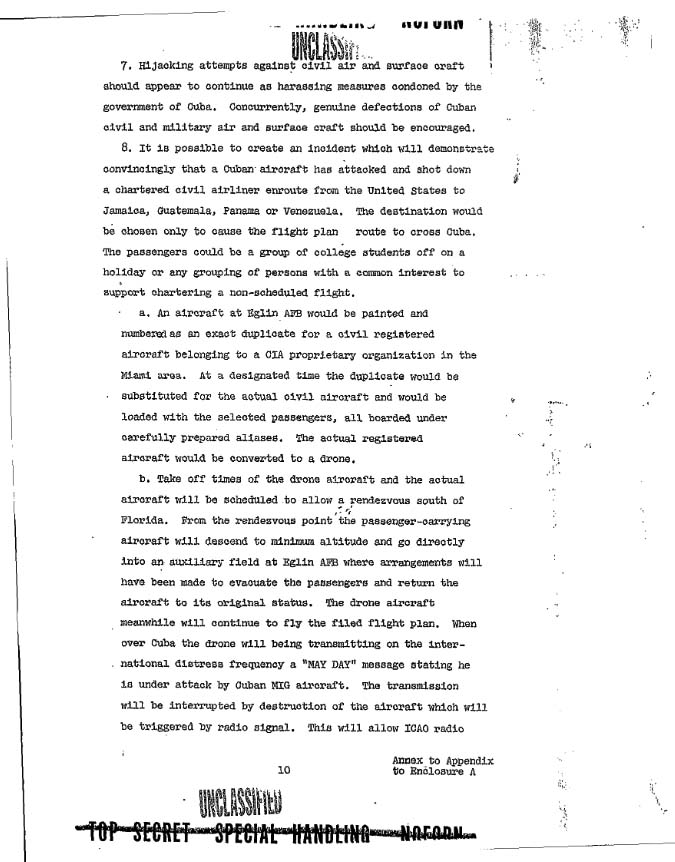 8. It is possible to create an incident which will demonstrate convincingly that a Cuban aircraft has attacked and shot down a chartered civil airliner enroute from the United States to Jamaica, Guatemala, Panama or Venezuela. The destination would be chosen only to cause the flight plan route to cross Cuba. The passengers could be a group of college students off on a holiday or any grouping of persons with a common interest to support chartering a non-scheduled flight.

a. An aircraft at Eglin AFB would be painted and numbered as an exact duplicate for a civil registered aircraft belonging to a CIA proprietary organization in the Miami area. At a designated time the duplicate would be substituted for the actual civil aircraft and would be loaded with the selected passengers, all boarded under carefully prepared aliases. The actual registered aircraft would be converted to a drone.

b. Take off times of the drone aircraft and the actual aircraft will be scheduled to allow a rendezvous south of Florida. From the rendezvous point the passenger-carrying aircraft will descend to minimum altitude and go directly into an auxiliary field at Eglin AFB where arrangements will have been made to evacuate the passengers and return the aircraft to its original status. The drone aircraft meanwhile will continue to fly the filed flight plan. When over Cuba the drone will being transmitting on the international distress frequency a "MAY DAY" message stating he is under attack by Cuban MIG aircraft. The transmission will be interrupted by destruction of the aircraft which will be triggered by radio signal. This will allow ICAO radio stations in the Western Hemisphere to tell the US what has happened to the aircraft instead of the US trying to "sell" the incident. 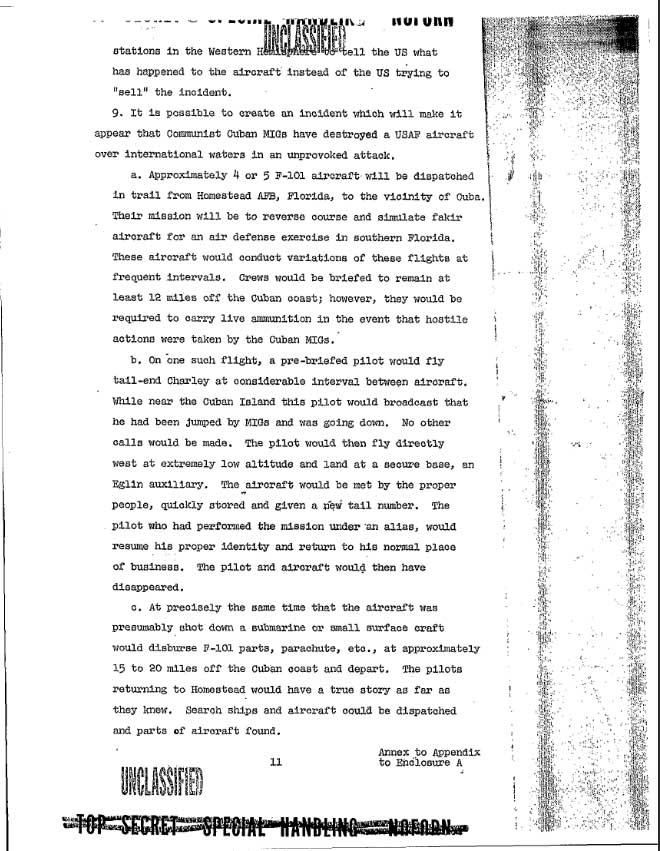 9. It Is possible to create an incident which will make it appear that Communist Cuban MIGs have destroyed a USAF aircraft over international waters in an unprovoked attack.

a. Approximately 4 or 5 F-101 aircraft will be dispatched in trail from Homestead AFB, Florida, to the vicinity of Cuba. Their mission will be to reverse course and simulate fakir aircraft for an air defense exercise in southern Florida. These aircraft would conduct variations of these flights at frequent Intervals. Crews would be briefed to remain at least 12 miles off the Cuban coast; however, they would be required to carry live ammunition in the event that hostile actions were taken by the Cuban MIGs.

b. On one such flight, a pre-briefed pilot would fly tail-end Charley at considerable interval between aircraft. While near the Cuban Island this pilot would broadcast that he had been jumped by MIGs and was going down. No other calls would be made. The pilot would then fly directly west at extremely low altitude and land at a secure base, an Eglin auxiliary. The aircraft would be met by the proper people, quickly stored and given a new tail number. The pilot who had performed the mission under an alias, would resume his proper identity and return to his normal place of business. The pilot and aircraft would then have disappeared.

c. At precisely the same time that the aircraft was presumably shot down a submarine or small surface craft would disburse F-101 parts, parachute, etc., at approximately 15 to 20 miles off the Cuban coast and depart. The pilots returning to Homestead would have a true story as far as they knew. Search ships and aircraft could be dispatched and parts of aircraft found.